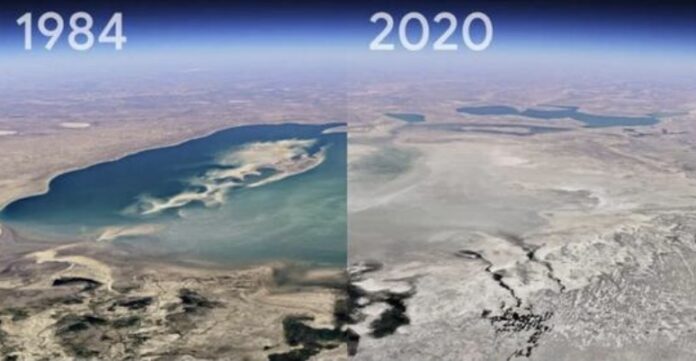 All across the western United States, climate changes have become more and more apparent. Lake Mead is no exception. In recent years, Lake Mead has seen a huge drop in water levels. The federal government declared the first state of emergency in August about the water levels along the Colorado River, directly beneath the lake.

These lower water levels in Lake Mead has not only resulted in a smaller habitat for local wildlife, but the decrease in water has also caused beaches to move inward. This will especially affect those who like to visit the lake, including UNLV students looking to kill some time and have a fun day in the sun.

When the lake’s perimeter shrinks, many beaches are displaced. Different debris that lie on the bottom of the lake will be closer to the surface, impacting water sports and recreational lake attendees.

The lake’s water levels are currently at only 36 percent capacity. Not only has the area been decimated by drought, but the reservoir is constantly draining the Colorado River at a faster rate than the water can be replenished. This constant net loss has led the lake’s water levels to plummet at record-setting rates, losing a level of depth approximately equal to the size of the Statue of Liberty in the past 20 years.

Lake Mead provides water through the Colorado River to seven states and Mexico. The federal government decided last week to cut the water levels sent to other states. This is a huge step in the conservation effort, but there is still no guarantee that the lake will ever regain its depth or return to its original size.

These policy changes also come in a recent string of various acknowledgments of climate and environmental issues, particularly as the impact on local Nevadans intensifies the longer the dry spell continues.

Over 7.5 million people visit Lake Mead every year, and many of those include local UNLV students looking to have a relaxing off day. With the lake’s capacity dwindling, there’s a chance that visits will be limited in order to minimize overcrowding.

Many may find themselves drawn to the beach to enjoy the terrestrial environments that serve as habitats for local wildlife and create space for outdoor recreation. These changes should not, however, cause one to believe these dropping water levels are not an issue.

These lake water levels dropping at record-setting rates are a local reminder of the ways climate change is altering daily life around the world. While the changes may seem small at first, they will eventually add up. This should serve as motivation to work to reduce one’s own footprint and make a positive change for the environment whenever possible.