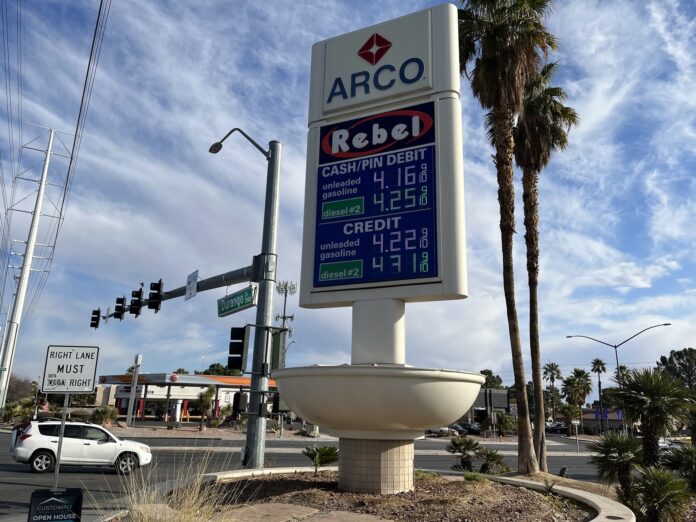 In the latter half of February 2022, Ukraine announced its full intentions of joining NATO (North American Trade Organization). Being a former Soviet satellite state, Russia was not too pleased with Ukraine’s announcement and began to make preparations to invade.

On Feb. 21, Russia recognized two breakaway regions of Ukraine, and three days later, launched a full-scale invasion into the country.

With Russia at the forefront of oil importation, especially in the United States, gas prices have soared to record highs in the days following the Ukraine invasion. The introduction of new sanctions, along with diplomatic condemnation has led to a shortage of gas supply and increase in overall demand.

With gas prices reaching record highs in recent days, is it time for the United States to reduce their dependence on foreign oil and become more energy independent?

“Yes, because we do have resources to produce our own oil and technology to find alternatives,” said Carlette Dias, a current member of the U.S. Navy Construction Battalion (Seabees) who frequently works within its respective oil sector.

“Being dependent on another country creates tension for our own supply,” Dias elaborated. “Although importing goods is good for stability and economics, it’s not good to have a full dependence on essential goods.”

Under the Trump administration, the production of oil through the Keystone XL pipeline cemented U.S. oil sovereignty prior to the Biden administration. With the pipeline, the United States remained the highest producer of oil in 2020, topping both Saudi Arabia and Russia.

Due to this, U.S. gas prices orbited around $1-$2, primarily due to the reduction of tariffs, currency conversion, freight costs, etc. In fact, as of 2019, the U.S. has become the primary net energy exporter since 1952. By having the national oil system, America was able to greatly expand its industrial exports and its ability to solely rely on itself for energy production.

Under the Biden administration, however, this oil sovereignty was short-lived, if not dead on arrival. In fact, cancellation of the pipeline was one of the first executive orders done by President Joe Biden.

According to The White House, the cancellation of the United States Keystone XL Pipeline “disserves U.S. national interest.” Following the cancellation, gas prices across the nation have seen a $2-$3 increase in price/per gallons. As a result, due to lack of domestic supply, the United States moved back to importing oil from its competitors, Saudi Arabia and Russia, driving up gas prices at the same time.

Under the basic laws of economics, by reducing supply and maintaining demand, the rise of gas prices levied on consumers is due to recovering the losses from the short supply. By having the United States rely on foreign oil, situations such as war can sever economic supply and increase consumer prices.

By having oil independence, the United States can regain its ability to rely on itself and use its resources for economic benefit. With war raging across the world, it’s absolutely imperative that America stay on track with independence, instead of relying on foreign nations.