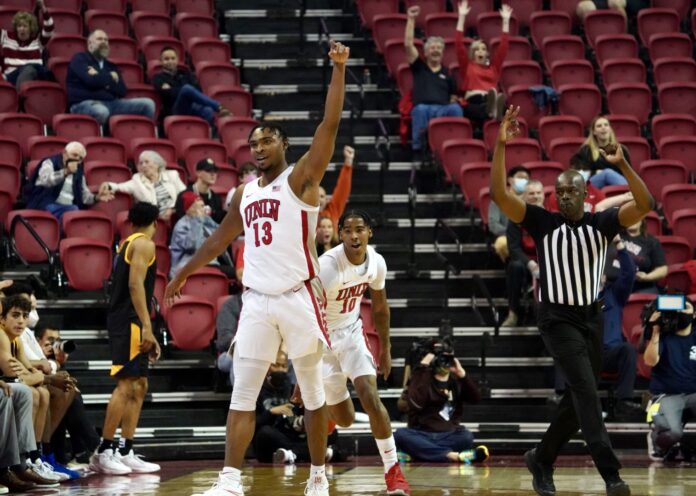 The UNLV Runnin’ Rebels fought off a second half surge from the San Jose State Spartans to earn a 70-62 win. The win improves the Runnin’ Rebels record to 3-3 in conference play.

Prior to the start of the game, the Runnin’ Rebels found out they would be without star guard Donovan Williams due to an undisclosed injury. Freshman guard Keshon Gilbert started for the first time for the Runnin’ Rebels, replacing the injured Williams.

Bryce Hamilton once again led the Runnin’ Rebels in scoring, finishing with 30 points for his second straight game of 30 or more points.

“I’m just ecstatic and proud of how the guys just continue to fight no matter what’s going on,” head coach Kevin Kruger said. “Learning that Donovan [Williams] was going to be out 15 minutes before the game, we adapted and adjusted knowing that San Jose State was going to

fight and compete and not be the same team that we played Monday.”

The Runnin’ Rebels started the game strong, opening with a 9-4 run. Royce Hamm Jr. started fast with five of those points.

Jordan McCabe continued the charge for the Runnin’ Rebels with two three-pointers, increasing the lead to 22-10.

The Spartans got contributions in the first half from their leading scorer Omari Moore who scored eight points and guard Trey Smith who scored two 3-pointers for six points.

Hamilton scored a spectacular buzzer beating three-pointer to end the first half. He led all scorers at the half with 14 points. The first half ended with a score of 38-24 with the Runnin’ Rebels leading.

UNLV started fast with Mike Nuga scoring an early layup to make it 40-24. Hamm Jr. had several key hustle plays, including a block on Moore and a saved loose ball that he kicked out to Hamilton for a crucial 3-pointer.

As the game wore on, the Runnin’ Rebels collapsed following a switch to zone defense by the Spartans. San Jose State went on an 8-0 run leading up to the final minute of the game to close the gap to 64-60.

McCabe committed a crucial turnover which gave the Spartans a chance to cut the lead even further with 59 seconds to go.

Moore turned the ball over on the next possession for the Spartans to make it a free throw contest from then on.

Trey Anderson finished with 19 points for the Spartans and Moore added 17 points.