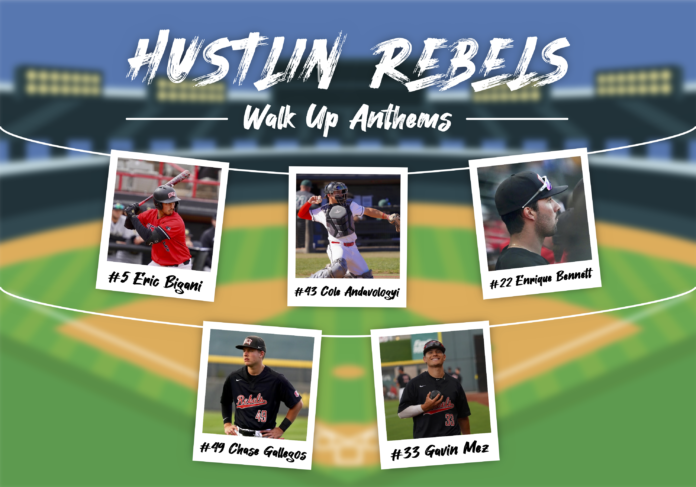 For some of the Hustlin’ Rebels, it took months to come up with the perfect walk-up song. For others, it only took a few minutes.

Between the five catchers on the team, it didn’t take longer than a week to come up with one or two songs for when they walk up to bat.

Here are all the walk-up songs of the catchers and the story behind why they were chosen:

For the starting catcher of the Hustlin’ Rebels, it took Eric Bigani the longest out of the group to come up with his two songs, taking about a week.

Twenty-five seconds into Bigani’s first song, “Prices” by Lil Uzi Vert, the bass drops and that’s where Bigani begins his walk to the plate.

“It leads into a big bass drop and it kinda gets me going,” Bigani said. “It gets me pumped up to go hit.”

A relatively popular song that gets the crowd going isn’t why Bigani thinks it’s the best, “my song is the best because it’s not generic like the others.”

As one of the two freshmen catchers from Las Vegas on the team, Chase Gallegos didn’t have to think long about the song.

“Didn’t take me long at all, maybe a couple of minutes,” Gallegos said. “There wasn’t much thought process, it was just one of my favorite songs.”

“Today” by Cordae featuring Gunna came out mid-January of this year and it didn’t take much thought on why Gallegos’ song is the best, “because it’s by Cordae,” he said.

Freshman Gavin Mez, the other Las Vegas local catcher on the team, didn’t think much into his song either, just threw his song choice out there when he was asked.

“There honestly wasn’t much thought process, it was a song I liked at the time,” Mez said. “I was asked what my walk-up song wanted to be so I chose that. It took maybe a day, I just threw it up there.”

“Lot of people know my song,” Mez said as to why his song is the best. “It’s something people can relate to so that’s why mine is the best.”

“I think it’s the most upbeat out of all of them,” senior catcher Enrique Bennett said about both his walk-up songs.

Both of Bennett’s songs were chosen within minutes based solely on “something that sounded good at the moment.”

“Total time thinking about it, probably 15 minutes,” Bennett said. “Just kinda ran through a playlist and got to something I liked and chose that one.”

Both of Cole Andavolgyi’s songs are well-known Fergie songs coming from Fergie’s 2006 “The Dutchess” album, which ultimately makes them the best in his opinion.

“Everyone knows my song,” Andavolgyi said. “If you hear that song your mood gets lifted, it’s just good vibes.”

Unlike the other catchers, Andavolgyi had his songs already picked out for a while, so it didn’t take him long to submit them when the email got sent out.

“I wanted something that would get the crowd going,” Angavolgyi said. “Get me excited.”