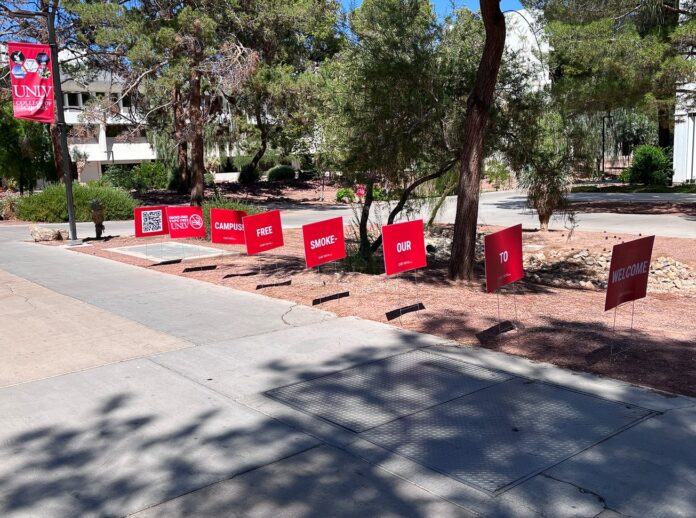 UNLV officially became a smoke and vape free campus this semester. This prohibits the smoking of cigarettes and e-cigarettes/vapes on campus. With the mission of public health on the frontline, the policy was designed to create a safer and cleaner environment for the entire UNLV community.

Though UNLV’s new policy looks like a win for the community, some students seem to be skeptical of its effectiveness.

“I would like to see how they intend to enforce it,” said Jarrat DanceKelly, a junior Biochemistry major, “I think the sentiment behind it is good, protecting everyone’s health and encouraging others to stop using tobacco/nicotine products, but I just wonder how they are going to enforce it.”

DanceKelly’s sentiment isn’t so far fetched either. Residents smoking inside of UNLV’s residence halls is not a new issue.

Resident Assistants come across this situation quite frequently. Per UNLV Housing’s policy, RA’s are expected to contact University Police Services and document the incident. This will travel to either the Upper Housing Administration or Student Conduct.

However, whether it is marijuana or tobacco smoke, the UPD said to RA’s on multiple occasions that they were told not to respond to the call or that the UPD cannot do anything. Student Conduct also doesn’t have many options without tangible evidence.

While enforcement is definitely an issue, the health benefits of less or no smoke are undeniable. According to the CDC, second-hand smoke causes nearly 34,000 premature deaths from heart disease every year amongst non-smokers. The CDC reports that the likelihood of a non-smoker developing heart disease increases by 25%-30%.

That being said, these statistics have no effect when there is effectively no way to implement a smoke-free environment on campus.

UNLV adopting the smoke-free campus policy sounds like a victory for public health activists on paper, but, the current methods of carrying out that policy certainly make it seem like becoming a smoke-free campus might be more of a slogan than a reality.