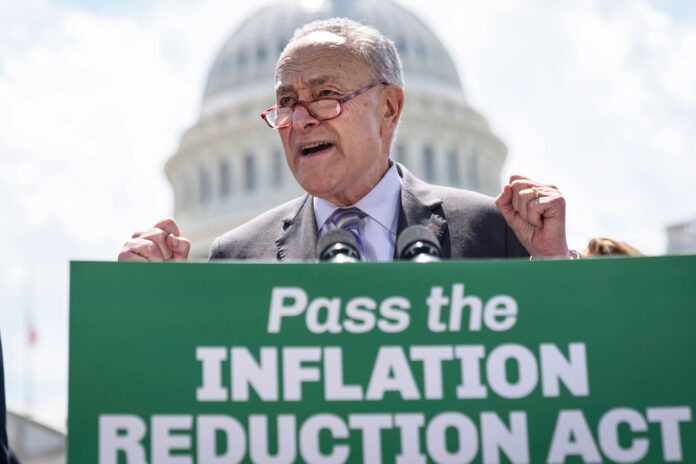 The United States Senate passed the Inflation Reduction Act, which is designed to combat the rising costs of consumer goods and increase government involvement in combating financial emergencies. This is a seemingly positive development in the right direction.

Many people, both at UNLV and across the country, expressed varying viewpoints regarding the effectiveness of the bill.

People from opposing sides of the political aisle have expressed concerns regarding whether the massive deficit created from the bill will affect them or whether such spending will actually be beneficial to the country in the long run.

With the current inflation rate hedging on 9%, will the Inflation Reduction Act actually help curb rising costs? How will this act affect UNLV students and their future?

“I do not believe that the Act will reduce inflation,” said Victor Gumenyuk, a sophomore Computer Science & Mathematics major at the UNLV Honors College.

The inflation rate will not be affected by this legislation, despite reports that it is decreasing, according to Gumenyuk. He said that the prices of general goods and services will still increase, forcing the average college student to budget more strictly.

Gumenyuk went on to further elaborate that a recent UPenn study found that legislation will have no effect on inflation and would only affect inflation +/- 0.1% by 2023, which is minimal compared to the current rate of 8.5%.

Although some students feel confident in the bill’s ability to tackle rising inflation rate and incentives to clean energy, some students hold a stronger opposition to it.

According to the White House, the Inflation Reduction Act will include $369 billion in spending to reduce greenhouse gas emissions, along with providing appropriate subsidies in accordance with the Affordable Care Act (2010).

A common concern regarding this particular precedent among students is that perhaps the move into fully-green energy alternatives is too early at this time. A large chunk of society is still heavily reliant on greenhouse gas energy providers for electricity, among other things. By removing such sources entirely, large sections of the country would experience electrical grid issues, along with severe rolling blackouts.

In most cases, business students at UNLV and across the country who are hoping to start their own company would feel quite the pinch from the bill. Based on the tax payments from the bill, a 15% minimum tax would take effect on manufacturers and other companies. Students would then face the reality that the entry curve into a competitive market is very steep given the premise of the bill. For all students and citizens alike, levying such burdens on manufacturers will continue to negatively impact the already struggling supply chain by creating financial barriers needed to effectively operate within each fiscal quarter.

Given the government’s massive spending and the financial burdens imposed upon citizens, will the bill actually reduce inflation as the name implies?

The inflation crisis exists in the first place because of massive government spending during the COVID-relief stimulus incentivizing people to stay home, while producing a less than optimal output in the market. Basic economic principles point to the fact a lower supply of goods with a high demand increases prices to break even. Hence inflation.

The most impactful part of the bill toward UNLV students is that it doesn’t just affect current students, but future UNLV students as well. Lawrence Summers, former Treasury Secretary for the Clinton Administration warned in 2021 that incessant government spending would set off inflationary pressures of a kind we have not seen in a generation, with consequences for the value of the dollar and financial stability. If the current deficit created from the bill will be primarily from taxes, then the appropriate burden from the bill will be shared among the country, including UNLV students.

With such a predicament, UNLV students could potentially benefit from the bill by having access to low-cost prescriptions and cleaner energy. On the other hand, students would be negatively impacted by the bill by having an even worse supply chain and potential tax burdens that will extend into the next generation.