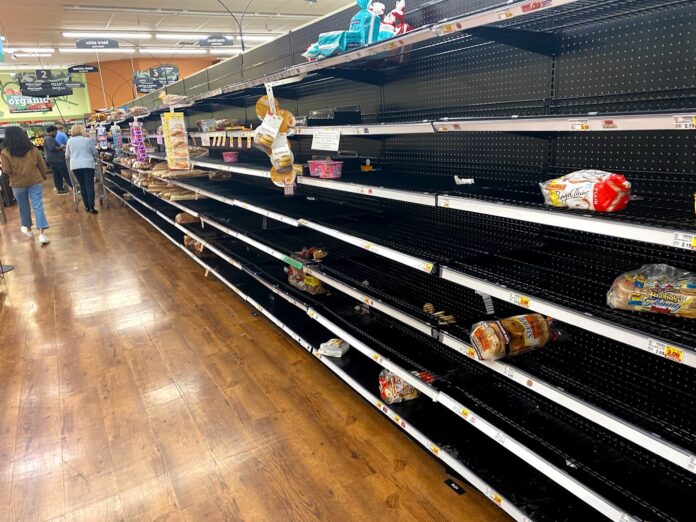 Just as the world was overcoming the delta variant, late last year, the Centers for Disease Control announced that a new rapidly spreading variant of COVID-19 had been recently detected: the omicron variant.

As post-delta variant tensions began to ease, the world was yet again plunged back into fear as citizens and businesses alike braced for rising cases and subsequent health-related public safety measures.

With businesses being backlogged with shipping delays, what could this mean for the economy and the future of national markets?

“If there’s a labor shortage in another place, that we rely on, it could spill over here,” said Dr. Andrew Bibler, an assistant professor of economics at UNLV.

“But I think, as far as I know, there seems to be some mismatch between the labor here and excess demand in labor markets here, including in the supply chain,” Bibler continued on his thoughts on what the virus could do to the economy.

Bibler went on to further say that because the virus’ outreaching influence seems to impact every sector of the business world. The significant loss of labor as a result indicates that world markets are ill-prepared for such future health conditions.

As seen with the original COVID-19 strain, stores and businesses have struggled to maintain a healthy labor force and keep up with customer demand. Empty shelves line the grocery stores, showing a visible disaster in the lack of maintaining viable employees.

As of January 2022, Capital Economics, a research group based on macroeconomic analysis, estimated that more than five million Americans are currently under quarantine and unable to return to their source of employment. With workers in such low quantity, companies and businesses have been forced to increase hours on existing workers in hopes of recovering lost profits due to labor shortages.

With state and local economies in omicron’s crosshairs, the food and resource shortage observed during March 2020 could potentially drive grocery stores to halt their business operations to make up for lost resources due to shipping problems.

As less and less items become available to people on the consumer market, the state and local economies has seen a drastic decline in overall gross income as overall sales have plunged due to a shortage of available products. On that basis, both economies and business together would see a collective loss in income, which could heavily drag down tax income from sold goods and required capital to keep stores in business.

It’s no secret that even e-commerce conglomerates like Amazon have felt the symptoms of backlogged shipping due to omicron’s impact. Compal, an Amazon technology supplier based in Taiwan, was forced to temporarily shut down due to rapid increases in omicron cases, delaying Amazon delivery functionality across the globe.

With such a predicament, online retailers would have to limit how many orders can be placed, as backlogging orders could present insurmountable delivery issues for shipping services unable to handle the sudden loss of labor due to the omicron spread.

With limits on order placement and delivery times, e-commerce services could see a sharp dip in both profits and customer reception.

Overall, with omicron halting shipping and causing several delays, it’s pivotal that governments and businesses alike learn to create safe work environments for all its employees during these sensitive times and maintain a labor force effective enough to combat backlogging delays.

Authoritative entities have the obligation to not only meet certain quotas, but to do so with employee health and safety in mind.