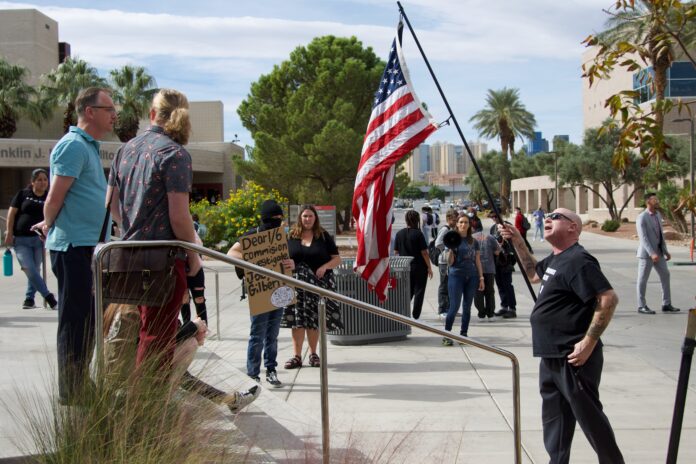 A recent South Dakota killing of an 18-year-old has national attention because the killer claimed that the victim was a Republican extremist.

In the early hours of Sept. 18, Cayler Ellingston was killed when Shannon Brandt, 41, ran Ellingston over with his car, according to multiple sources. Brandt reportedly accused Ellingston of participating in a Republican extremist group in a 911 call after the killing.

North Dakota Highway Patrol reported no evidence for Ellingston’s membership in such a group, according to the Associated Press.

Regardless of the true politics of the victim, the possibility of this being a political killing raises concerns in the country and on campus.

Is political involvement getting so dangerous that students should avoid it to stay safe? No.

“If you’re thinking about physical violence and threats, I think that that’s pretty low,” said Robert Futrell, Sociology professor and chair of UNLV’s Sociology department. “There’s a big step between talking about or pushing towards the step towards violence, and then taking that step.”

According to the Anti Defamation League, at least 29 people were killed by political extremists in the United States in 2021. Though this was more than the previous year, the ADL pointed out that this total was less than any of the five years before 2020.

Nour Benjelloun, a member of UNLV’s Democrats, said that he is always relatively concerned about possible violence.

Zoe Dockery, Vice President of UNLV’s Young Republicans, said that she and her colleagues also worry about political violence.

Dockery said in an email that her worst encounter with people of different political views came when she was knocking on doors for a Republican candidate. She said that people driving by shouted at her and her colleagues, calling them racist and homophobic for supporting a Republican. Dockery and her colleagues reportedly worried that they’d be followed after the encounter.

Benjelloun and Dockery’s worst encounters fortunately didn’t lead to physical violence. Though the actions used against them also line up with common tactics of the politically extreme, according to Futrell. He said that harassment and baiting tactics are frequently used by extremists against their opponents.

Futrell said that extreme groups are trained in these tactics and are very aware of the line for what’s legal and illegal.

The counterpoint to all of this is that we live in a historically polarized time that is consistently getting worse. It makes sense that as politics get more polarized, extremes get more normalized. The more extremism, likely the more violence.

The current, polarized landscape is already discouraging students from getting involved politically, according to Benjelloun. He said that he’s talked to students on campus who aren’t politically active because of the current level of polarization.

The way to stop the increasing polarization is to change the course that politics are currently on. The only way to do that is to participate if you’re passionate. We cannot allow the violent actions of a relatively few outliers stop us all from making the change we want to see in the world.

“It can be uncomfortable, but all politics is uncomfortable because it’s partly coming to some degree of understanding of one another and compromise,” said Futrell. “And it’s never easy, but I would say to participate, and I wouldn’t worry too much about the actual physical violence.”