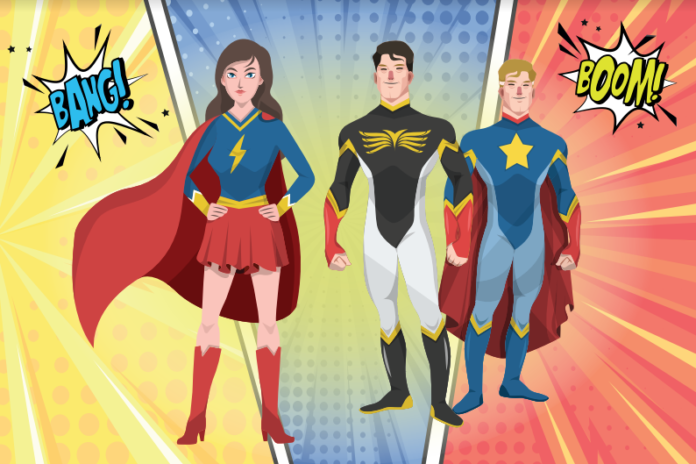 The days of the overly masculine, heterosexual superhero are coming to an end. Now

more than ever, society is witnessing a rise in female-led superhero movies and TV shows, accompanied with an unprecedented amount of LGBTQ+ representation in mainstream media.

For a very long time, there was a toxic narrative surrounding female leads in superhero films with many people believing that if women starred in action films, specifically hero films, they would underperform in box office profits.

There has been a very subtle presence of women in superhero films for years, most notably Scarlett Johansson’s portrayal of Black Widow for years alongside a predominantly male cast. However, these women only ever served as side characters or even love interests for the main superhero, never receiving as much focus.

It wasn’t until 2017 when DC Comics and Warner Bros released “Wonder Woman” that the power of female-led hero films became apparent. It was the first true mainstream superhero film that centered around a female lead.

“Wonder Woman” was a box office success, internationally grossing over $821.7 million. It destroyed any doubts of the success of female-led superhero films, and paved the way for more projects like it to come into fruition. The movie’s success was inarguably critical to the tidal wave of diverse casts in mainstream media witnessed since then.

Since the release of “Wonder Woman,” the Marvel Cinematic Universe has followed DC Comics and released a number of shows and movies starring women. These projects include the latest streaming sensation “WandaVision,” starring Elizabeth Olsen, and “Black Widow,” starring, for the very first time on her own, Scarlett Johansson, and grossing over $100 million domestically within its first week of release.

Not only were these latest projects an economic success, but they were internet sensations as well. “WandaVision” outperformed hit rival TV shows like “Bridgerton,” “Cobra Kai” and “Firefly Lane” in terms of google searches.

Not only has there been recent success with female led superheroes, but there has been an increasing number of projects involving LGBTQ+ characters.

Even Marvel’s “Runaways” features the journey of discovery and acceptance of the queer identity for superhero alter ego Karolina Dean. TV shows and movies are breaking away from the stereotypical macho male superhero showing that anybody, no matter gender or sexual orientation, can be a hero.

More shows and movies like these have emerged over the years, with the entertainment industry finally catching up with society. It is beginning to reflect the demographic of its viewers, and as we move forward into the digital era, there is more to come for women and/or LGBTQ+ heroes.