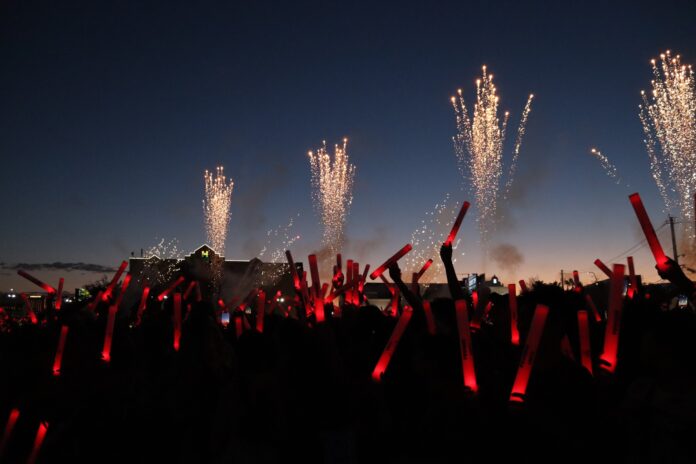 UNLV kicked off the fall semester by welcoming one of the largest freshman classes in history with Premier 2022.

This is the twenty-sixth Premier,a traditional start-of-year event that has been a mainstay of the university since 1996, according to UNLV’s website. It is organized by the Rebel Events Board in conjunction with many other clubs and organizations on campus.

The night began with a variety of food, students taking photos and the UNLV fight song blaring in the background. Students were able to try their throwing skills at the football toss as a game. They also danced the night away while having various food trucks to replenish under the excessive heat warning from The Weather Channel.

UNLV students were not going to let the heat ruin Premier.

“I think Premier is an exciting tradition, it commemorates a new school year, and brings everybody together in celebration for what’s to come,” said Taylor LaBelle, UNLV senior.

First-year students to seniors literally rang in a new school year, a UNLV tradition as old as Premier itself.

“The way I would like to describe [Premier] is like a start of the year party,” said Jayla Webb, a UNLV sophomore.

When the sun went down, students walked to the west side of the intramural field to take the traditional lit up school’s acronym photo.

To take the photo, the freshman would stand together to form the letter “U”. Webb stood with her fellow classmates to make the “N”. While juniors and seniors made up the “L” and the “V”in the UNLV photo.

Premier brought a lot of smiles and laughs from the festivities, returning students expressed their excitement for another school year, and their favorite parts of the once a year event.

“I would definitely have to say [my favorite part was] the swag,” UNLV freshman Katerina Fradet said. “I’ve got like three shirts, a couple lanyards, and some stickers,”

While the kickoff brought in large crowds, some students said that there was also room for improvement for upcoming years.

When asked what could be improved, Kyah Caley, a UNLV junior, said, “Honestly, I say the music selection. You know, diversify a little bit more. It was still really cool.”

Back in 2019, over 5,000 students made it to Premier, according to UNLV. The university ranks as one of the most diverse campuses in the U.S., tied with three other colleges, according to the U.S News and World Report las year.

Students felt that diversity at Premier.

“Premier for me means just seeing a different side of UNLV, seeing all the different people come out,” Caley siad. “We’re gonna mingle, meet new people, and just kind of learn what the culture of UNLV is really like.”

With premier over, the 2022-23 school year is underway, and UNLV has many activities and events planned for the rest of the year.