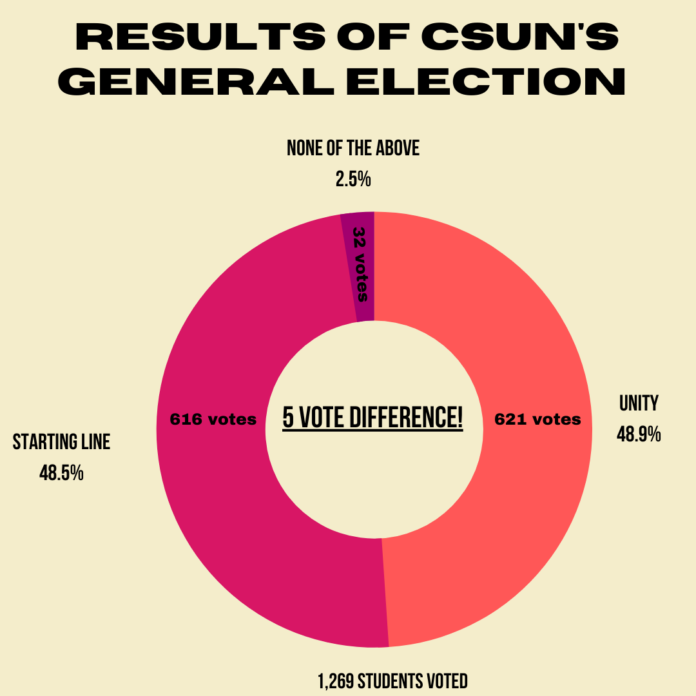 Students voted for the Unity ticket to be the next student body president, vice president and senate president of UNLV’s student government organization, CSUN.

The result of CSUN’s general election was posted on CSUN’s office window, located on the third floor of the Student Union, on April 14 at 6 p.m. with 1,269 student voters. Undergraduate students picked Unity to represent them starting next school year. But the election was far from one sided as Unity won by less than a percent over Starting Line.

Out of the 1,269 votes, Unity received 621 votes and Starting Line gathered a close 616 votes. While 32 students voted for “none of the above” option, those votes could have flipped the tables as the difference between the two tickets was just five votes.

The last CSUN general election brought in over 1,124 votes in a virtually dominant campus. In this election, more students are on campus as classes are 60% in person and 40% remote.

There are still lingering complaints that need to be addressed in a meeting to verify the results of the election, stay tuned for more information.

“The very first feeling we felt was shock,” Dyana Melcher, elected CSUN vice president. “I remember getting the results and calling Issac right away, ‘This is real, we really did it’.”

The Unity ticket describes themselves as the outsider ticket. Issac Hernandez, elected CSUN president and Melcher both were in CSUN, while Jesse Welsh, elected CSUN senate president, is a current senator for the Lee Business School. Compared to their competitors, Starting Line, all currently hold positions in CSUN.

This election also broke a record for voter turnout at UNLV for CSUN. This is partly due to the mobilized effort that both tickets made to be on the ground and talking to students about the election. Although this election has broken the record, the voter turnout on campus still only represents about 5% of undergraduates that are paying student government $30 a student that amounts to a $1.6 million budget.

“A massive weight has been lifted off of our shoulders,” Welsh said. “There has been a lot of pressure throughout this election.”

Starting Line went from having 28% of the votes to 48.54% of votes. The ticket gave Unity a run for their money and Unity has a lot of respect for the tickets ability to give them a competitive race.

“The fact that the outcome was determined by five votes,” Hernandez said, “Your vote matters, one vote does matter.”

First on the Agenda

First on Unity’s list, is to start getting more students involved with CSUN by making the organization more transparent. Currently, the website for UNLV’s student government was described as difficult to maneuver to find critical information. The website leaves users chasing link after link to find themselves in a Google Drive that consists of folders labeled with numbers. By cleaning up the website, Hernandez believes students will start to see the structure will create an ease of accessibility to important information.

Hernandez admits that there may be a barrier with reorganizing the website due to UNLV administration may not like changing the website. His counter, independently switching over to a different website rather than directly being on UNLV’s interface. The website would switch from having everything on a Google Drive to having tabs to minimize clicking on multiple links and avoiding some of the nuances that comes with having all the information students need on a Google Drive.

As the website is being revamped, the ticket will focus on a mental health project that needs to be started early in order to see realistic changes. Hernandez wants to see the implementation of an office and an expansion of resources to the program.

“There’s a lot that we want to do at first, but this is where Dyana comes in and she ends up telling me ‘One step at a time,’” Hernandez said. “… I like to plan very largely, Dyana is one of those ‘Let’s do this for the day,’ she keeps me in frame of how we should actually maneuver. There is a lot we want to do. ”

Melchor points out that they will also be working on communication and collaboration around campus.

“At the end of the day, it’s not up to me and Issac,” Melcher said. “It’s also going to be up to the collaboration that we are able to achieve with the overall university and the community.”

“Even if you just vote, that’s being involved and being aware,” Melcher said. “You can be involved in CSUN in a number of ways. That could be just by coming to our events, getting to know your representatives, coming to town hall meetings and responding to surveys.”

CSUN is meant to serve and represent students and Melcher is hopeful that every student is able to have an interaction with student government. CSUN’s current executive board with Caren Yap, current CSUN president and Abe Lugo current CSUN vice president, has opened direct communication lines with Registered Student Organizations (RSOs) through a presidential advisor committee to voice their concerns and opinions.