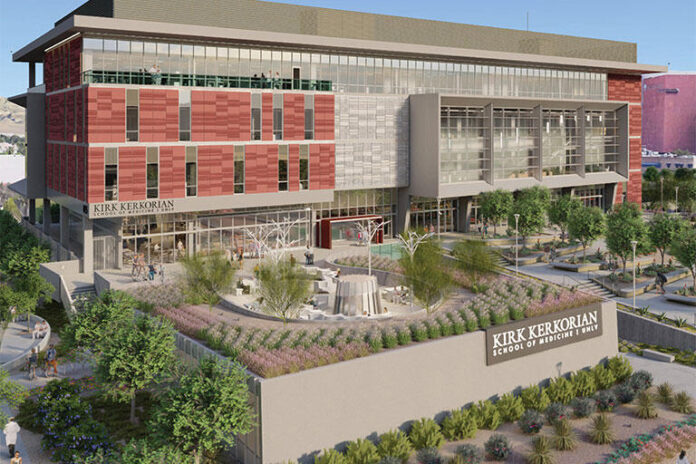 Students from UNLV’s Kirk Kerkorian School of Medicine held a meeting called “Med School 101: How It Started vs. How It’s Going” on Nov. 10. In the meeting, three first-generation students of medicine discussed helpful strategies to help their audience in their application to medical school.

“Like most medical schools in the country, the medical school application process is centralized through a service known as its centralized to the Association of American Medical Colleges,” said UNLV’s dean of the Kirk Kerkorian School of Medicine and vice president of health affairs, Marc J. Kahn. “Applicants apply using the portal that the AAMC provides, they’re then asked to submit a secondary application where we get information that pertains more to our school, it’s more specific. Applicants are then interviewed for acceptance.”

Kahn mentions that currently, those interviews are virtual, but in the past, they’ve been in person.

“The admissions committee looks at the file. So they look at the interview reports, and they make a decision whether an applicant is admitted or not. I should mention that the decision to interview is also under the purview of the admissions committee, they decide who they’re going to interview.” Kahn explained. “So it’s a multi step process. It’s an application, a personal interview, and then a decision.”

The presenters told the meeting that while good grades, especially the grades of the classes  in the later part of a students degree, are important, but not the only requirement for a successful application. They spent a lot of time talking about how applicants also need a strong resume of volunteering, medical work experience, shadowing doctors and letters of recommendation to give themselves the best chance of admission to medical school.

“We want to ensure that students who come to medical school know what being a doctor is, and there’s lots of ways to do that,” Kahn said. “We want to make sure that you’ve had some clinical exposure, so that you know what you’re getting yourself into, that can be anything from shadowing a doctor, to some students getting their EMT license and work as EMT’s, some students work as scribes. Those are very meaningful experiences, and we’re confident that students who have those experiences know what they’re getting into with the medical profession.”

This extracurricular work can also help another important quality for an application, networking. The speakers at the meeting emphasized how much help networking in Nevada’s health care system is to both a medical school application and medical career, ranging from letters of recommendation to job opportunities. Khan echoed this notion when he said that having a connection with the state of Nevada is vital to acceptance to UNLV’s medical school.

“We look for students at UNLV, who have a connection to our state, our mission is to serve our community,” Khan said. “And in doing so we want to make sure we train doctors for our community. So people apply from out of state and have no connection. Frankly, they don’t even get interviewed. That’s not who we’re looking for.”

The medical students in the meeting emphasized that what is most important for students to have success is passion. They made clear that being passionate about the kind of work that you do toward your application will help it much more than participating to just check off a box on the application. The speakers also said that being able to speak passionately about the work in the interview also helps chances of being accepted.