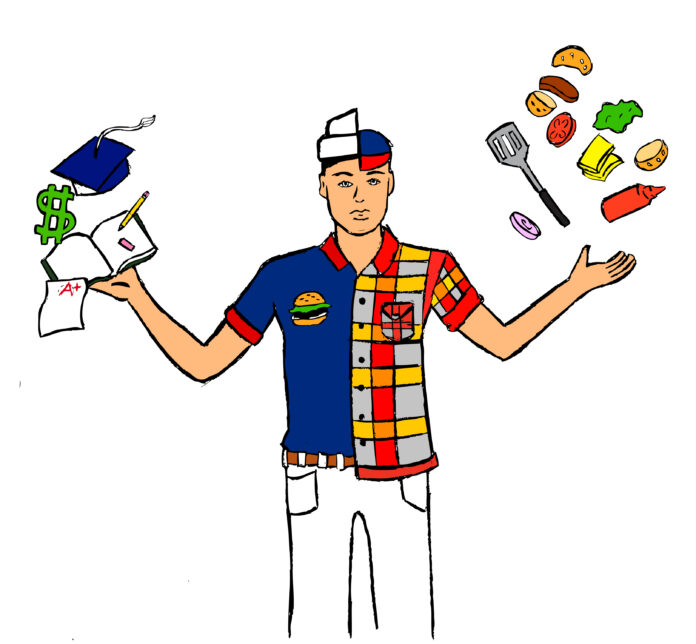 Those are the primary components of a working student’s life. Attending college in the 21st century comes at a high cost, and tuition is not the only cause. The ongoing rise in inflation has made maintaining a job a necessity to live.

A handful of students in Las Vegas lack the means to support themselves financially. Pursuing a higher education is no longer as simple as going to class and studying. Students are left with a difficult choice to make. They can either attend school full-time, earning little, or attend part-time just to put food on the table.

“I never try to dissuade students from working or encourage them to start working,” said Eric Michael, an academic advisor in the Greenspun College of Urban Affairs. “I usually ask them questions like: Are you concerned about being a full-time student? Do we really need to worry about a four-year plan if we’ve got to keep your head above the water?”

According to the Hechinger Report, students typically need 15 credits per semester in order to graduate in four years.

Not only upperclassmen put in extra hours to earn more cash. Students at all levels are finding ways to make ends meet. The increase in living expenses has made this trend grow further.

“I come across students who work quite often, especially lately,” Michael said. “Even as freshmen who are working full-time. It’s a lot more common than it was in 2019 or even 2018.”

The benefit of working while receiving a higher education is that students have options for where to work. Since the goal of receiving an education is to go into the career field of their choice, the industry they work in throughout the meantime is not necessarily as important.

“For me in particular, I’m a little bit lucky. I drive for Lyft, for Uber, for GrubHub, for Amazon,” said Hector Salomon, a senior at the University of Nevada, Las Vegas. “I’m an independent contractor. I can make my own work schedule that revolves around my school schedule, but I know that a lot of classmates aren’t as lucky.”

Mental Health America states that 70% of college students stress about finances. This data shows why so many students pursue jobs. When it comes to managing time spent at those jobs, a healthy balance can be hard to find.

“In order to meet all of my financial obligations, I try to work anywhere between 30 to 40 hours a week,” Salomon said. “I know that if I try to do 40 I’ll obviously make more money, but I then step into the area where I’m sacrificing school to do so.”

It can be difficult to not overwork, which is part of the responsibility of being an independent contractor.

“For older students, a lot of them are already in their field and starting to get established,” Michael said. “But maybe to get a promotion, they need to finish their degree. Predominantly for fresh-out-of-high school students, they’re working in retail and just trying to have a job that makes the bills.”

Historically, inflation has only grown over time. The reality is that the next generation of college students are likely to face the same struggles in the future. It only means so much to aspire for a bright future if students are struggling to keep the lights on or feed themselves.

The collegiate years of full-time students are generally under half of a decade. While that may seem like a long time, it’s a relatively short period compared to the years spent in their career.