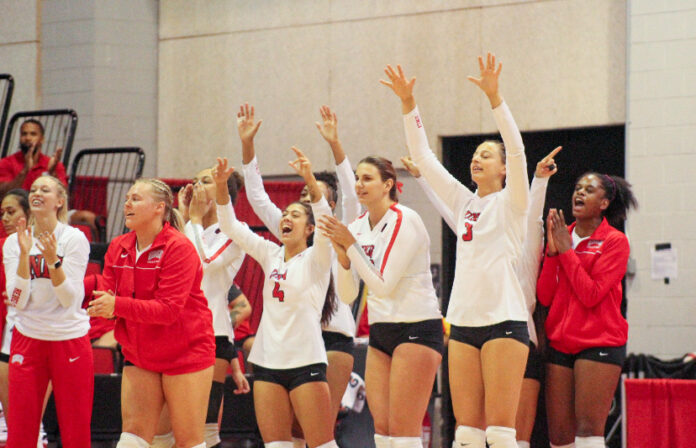 In the first set, the Rebels had a slow start, 1-4. UNLV went on a 3-0 run to tie the score, 4-4. The Sun Devils kept a constant two point lead, but the Rebels found a way to catch up.

For the second set, it was an easy win with a close score, 14-13. UNLV remained aggressive and led by three points, before earning a 25-21 victory.

The Sun Devils took an early three point lead (3-6) during the third set. UNLV took their first lead shortly after, but it didn’t last long.

The game remained close with a tough battle before the Rebels took a 24-21 lead. However, the Sun Devils had an aggressive 3-0 run to tie the score at 24 even. Arizona State University (ASU) kept its aggression and won the set 24-26.

Once again, the score was close in the fourth set, 13-15. The Sun Devils had the largest lead of the night with five points, 17-22. Despite a strong battle from the Rebels, ASU won the set 17-25.

Mariena Hayden led the team with 21 kills, Shelby Capllonch had 13 kills and Milica Tasic had 12 kills. Lauryn Burt had 29 assists, and Adrien Fafard had 25 assists to help the Rebel offense.

The Rebels will remain on the road and travel to California to face the San Jose State Spartans on Sept. 23 at 6 p.m. before facing the Nevada-Reno Wolf Pack in Reno on Sept. 25 at 1 p.m on the Mountain West Network.