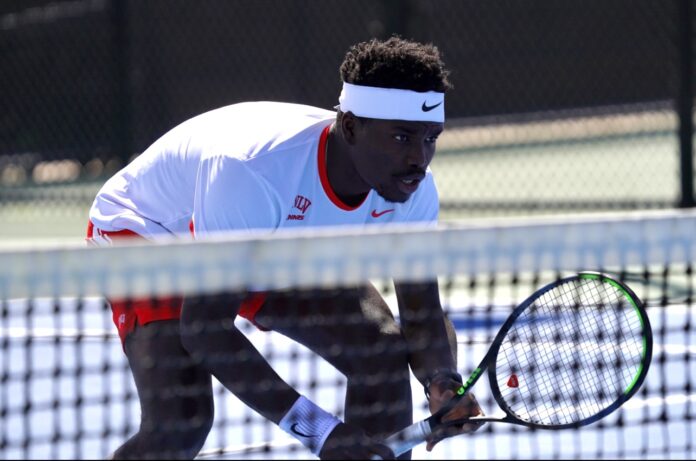 The UNLV men’s tennis team bounced back from a pair of 4-1 losses on the road this week to beat the UC San Diego Tritons 4-1 and 6-1 in a Saturday doubleheader .

The two wins boost the Rebels record to 10-9 overall this season.

The Rebels also lost 6-3 on court three when Thomas Navarro and Jack Hambrook were beaten by Phillip Lan and Pelayo Rodriguez.

Phillip Lan and Rodriguez are UCSD’s best doubles team with an overall record of 9-1 this season.

Going into the singles competition, UNLV had to win at least 4-of-6 games to win the series. The Rebels did just that, winning four games quickly to take a 4-1 win.

The win moves Bulus to a 16-5 overall record and plunges Traxler down to 3-12.

Coming in at 3-11, Traxler entered as a massive underdog and Bulus made sure of that. Bulus forced Traxler to chase several powerfully accurate shots, while also forcing Traxler into repeatedly committing unforced errors.

UNLV also got stellar performances from Sauer, Brodney, and Zach Garner to secure the 4-1 victory.

Following the first series, UNLV head coach Owen Hambrook stressed the importance of getting healthy and ready for conference play, a few team injuries leading up to their conference schedule.

“The whole aim is to have a good non-conference schedule and play the best, that’s what we want to be,” Hambrook said. “We are slowly but surely getting healthy, and we should be good to go.”

In the second series in the afternoon, UNLV won in even more dominant fashion, winning 6-1. The Rebels won all three doubles matches and won 5-of-6 singles matches.

Highlights for UNLV in the second series singles included Sauer picking up another victory, this time over Rodriguez 7-6 (7-1), 6-3. Atherton also destroyed UCSD’s Joseph Teh 6-0, 6-0.

In the doubles, Dabic and Brodney continued their solid form for UNLV by easing past UCSD’s Cole and Tristan Taylor 6-2.

The Rebels best team of Bulus and Garner improved to 8-2 overall this season by defeating Devineni and Teh 7-6 (7-4).

The losses for UCSD ended their two-game win streak and dropped them down to 5-13 for the season.

The Rebels will host a match against UC Riverside on Mar. 29 to close out their non-conference season.